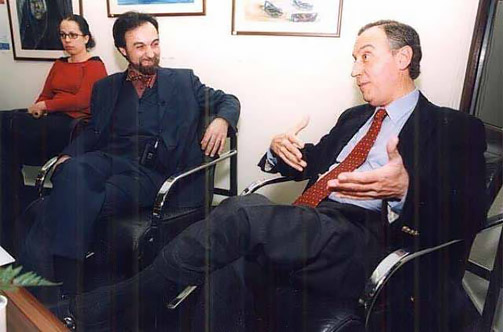 A conversation in the coffee concert format created by Paulo Lameiro for the Orfeão de Leiria in 1997, when he was its Pedagogical Director. On one chosen Thursday of every month a guest from a cultural area was interviewed by Paulo Lameiro, who always had one or several musical guests. It was held in the Foyer of the Theatre José Lúcio da Silva in Leiria, and had as guests Marcelo Rebelo de Sousa, João Benard da Costa, Maria João Seixas, the then Minister of Culture, José Sasportes, Mário Vieira de Carvalho, Rui Vieira Nery, Adelino Gomes, Francisco Lacerda and Carvalho Rodrigues, among others. The Maestro Vitorino de Almeida followed Paulo Lameiro in the direction of the program and was later followed by Professor Carlos André.

Create in Leiria an informal program to stimulate artistic enjoyment and promote a reflection on Culture.