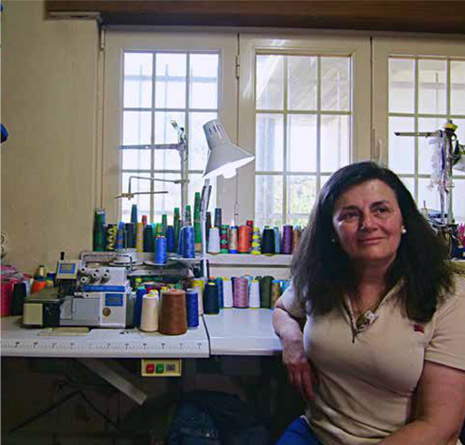 From Loureira, in Santa Catarina da Serra. Ever since she was little she dreamt of being a seamstress. At the age of 7, she began to learn how to make the skirts of her dolls with a neighboring cousin who was a tailor. She later learned the trade with a master seamstress. She studied till the 12th grade and learned to sew in her spare time.

Sewing is her passion, but she also loves to cook. The best thing that happened in her life was to become the mother of her three children, and she considers a blessing to have been able to assist her father and her father-in-law in the final stages of their lives.

From all her works, there are several projects in the field of museology that stand out such as the restoration of the costumes of Saint Francisco Marto and of his father’s for the Museu de Arte Sacra in Fatima. The recovery of ancient costumes is one of her passions, as well as creating gowns for the images of the Saints. The models worn by Nossa Senhora da Guia and Nossa Senhora do Ó stand out in this area. Many of the replicas of the costumes worn by the Pastorinhos de Fátima, in exhibition in the museums of several countries such as Brazil, France and Italy, were made by her.

All the costumes for the Concerts for Babies came from her hands, as well as the outfits for several choirs, such as the Schola Cantorum Pastorinhos de Fatima. She usually makes costumes for several school dance and music performances. Nevertheless, wedding and formal dresses are her most frequent area of work. Catarina Fartaria’s greatest satisfaction is to see the happiness of the people she dresses.